The day of my first National Student Pride has arrived and to be honest, I wasn’t quite sure what to expect. My time of being a student has long past and I had a slight fear that I was going to look like a teacher at the school disco. But in true Best Gay Life style I told myself to suck it up and get my ass inside.

As I ducked behind the huge pink inflatable hand and inside Westminster University, I couldn’t help but feel a little envious! I loved my uni days, but I don’t remember anything happening anywhere near the scale of this event. Especially, something that so clearly and loudly celebrated every colour of our LGBT+ flag (the flag which would later end up being the centre of some of the more contentious debates of the day).

The welcome hall has stall after stall of employers promoting their inclusivity policies, talking about their companies and giving away some damn awesome free stuff. I seem to revert to be a nervous child whenever I go to events like this, tentatively asking “sorry, can I take one of these?”. You are never too old for a freebee, especially a rainbow cup cake.

Nestled in the side of all this action was a small stage. As a total Student Pride virgin, I pondered for a moment whether this was where all the action was going to be taking place. Could I see all those ‘big names’ squeezed on there?

But I soon forgot all about that when Eleni C strode on the (what I later found out was named) Smoke Radio music stage. Eleni had a mighty Latin style pop voice and even mightier swag when it came to the dance moves, my favourite of which was some pony tail hair whipping. Eleni’s version of Shakira’s Wherever, Whenever! got the crowd going and you couldn’t help but smile.

With the rhythm in my hips, I made my way downstairs to the main stage….and WOW! This was most definitely not like the small student event I was expecting. The exhibition sized main stage was boldly decorated, huge and in the centre of an array of cameras, lights and commercial level branding. Of course, it would be rude If I didn’t pop by the bar for a quick drink. The pink lasers, and club style light cube stalls made for a great venue. I had my companion with me for the day, and there was no way either of us were going to pass up the opportunity to take the obligatory selfies in front of the perfectly flattering lights. 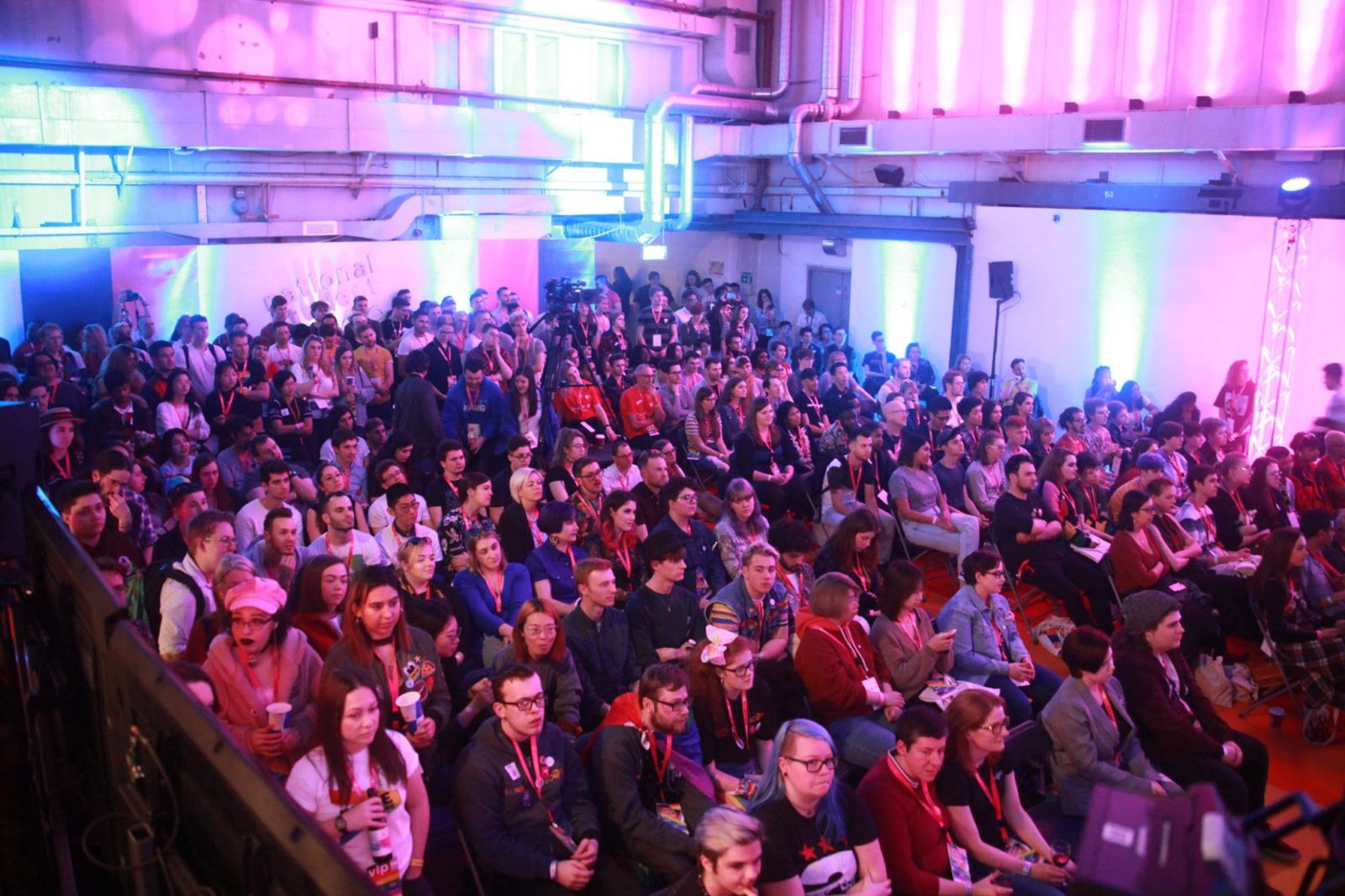 We got a drink and settled down in the front row ready for an afternoon of debate. I wasn’t going to miss this opportunity for being that close to Ian McKellen.

The main stage event was expertly hosted by Juno Dawson (author, journalist and queen of teen) and James Barr (MTV presenter and stand-up comedian). These two had great presence and smash any duo I’ve seen on prime time recently. Talk about chemistry! They had me in stiches, and there is something so loveable about Juno. 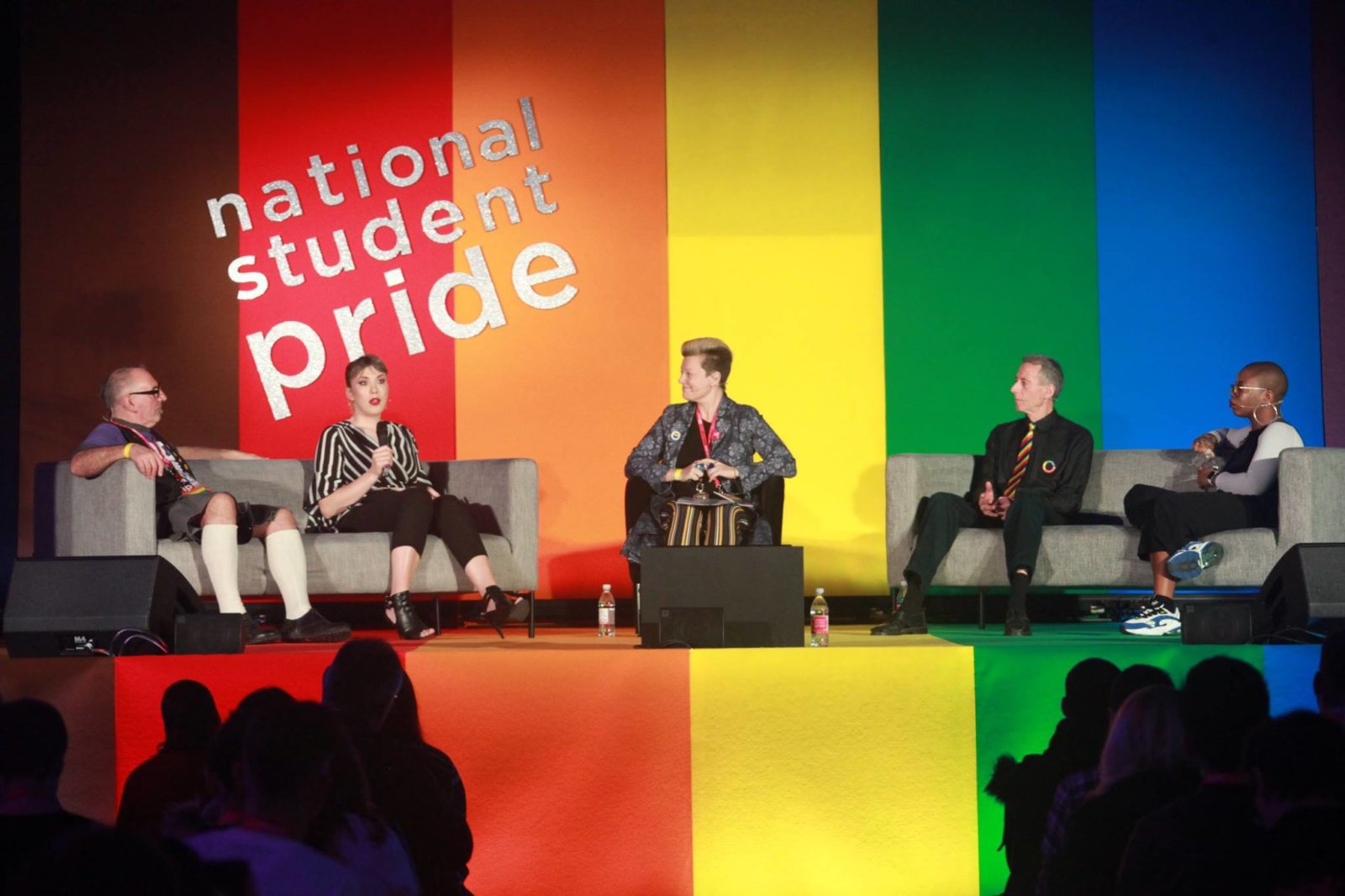 “You can only free everyone, when you have freed black trans queer people”

The main focus of the event is challenging racism on the scene. The stage was poignantly and literally framed by a huge LGBT+ flag that engulfed the stage and the back drop. The flag included the brown and black stripes that represented people of colour, and this was the catalyst for the first of the conflicts on this enthralling, challenging and important debate.

Paula referenced the additions to the flag, particularly some of our community’s objections. Paula talked about the challenges that are faced by living in a white hetro-normative society “You can only free everyone, when you have freed black trans queer people”.

Peter went on to question whether there should also be other colours in the flag and spoke on behalf of the East Asian LGBT+ community, when he talked about them “being completely excluded from the LGBT+ narrative”.

Elle Barnes pointed out there is a moment of celebration for the region due to Taiwan announcing that they would officially recognise same sex marriage and that they were the first South East Asian country to do so.

Peter subsequently queried whether there need to be a complete redesign of a flag which was originally created to represent values such as Life, love, healing etc.

The panel reflected on how the face of activism had changed from the more aggressive form it had taken in the past, when there was a need to change laws as well as social norms. Although a later reference by Ian McKellen pointed out that not all activism had been the same when he referenced the very different approaches from the more militant Outrage (fronted by Peter) and by Stonewall (whom Ian represented).

Paris Lee was a late arrival to the panel but did not disappoint. There is something that is straightforward with Paris, that I couldn’t help but admire. Paris rhetorized “What are schools doing to challenge gender-based bullying and does every school have a policy on it”. It’s clear what Paris is fighting for and it makes absolute sense. She also went on to highlight how important climate change is an issue for LGBT people. Paris pointed out that “no one is going to care about your pronouns, when they are fighting for food in the supermarket”.

Peter gave his views on how the direction of LGBT+ activism has changed, being lead up by non- binary and transgender people fighting the traditionalist norms that we have been expected to work within. For a little boy who was forever being told to toughen up, this comment struck a particular cord (as I’m sure it did most of the audience). 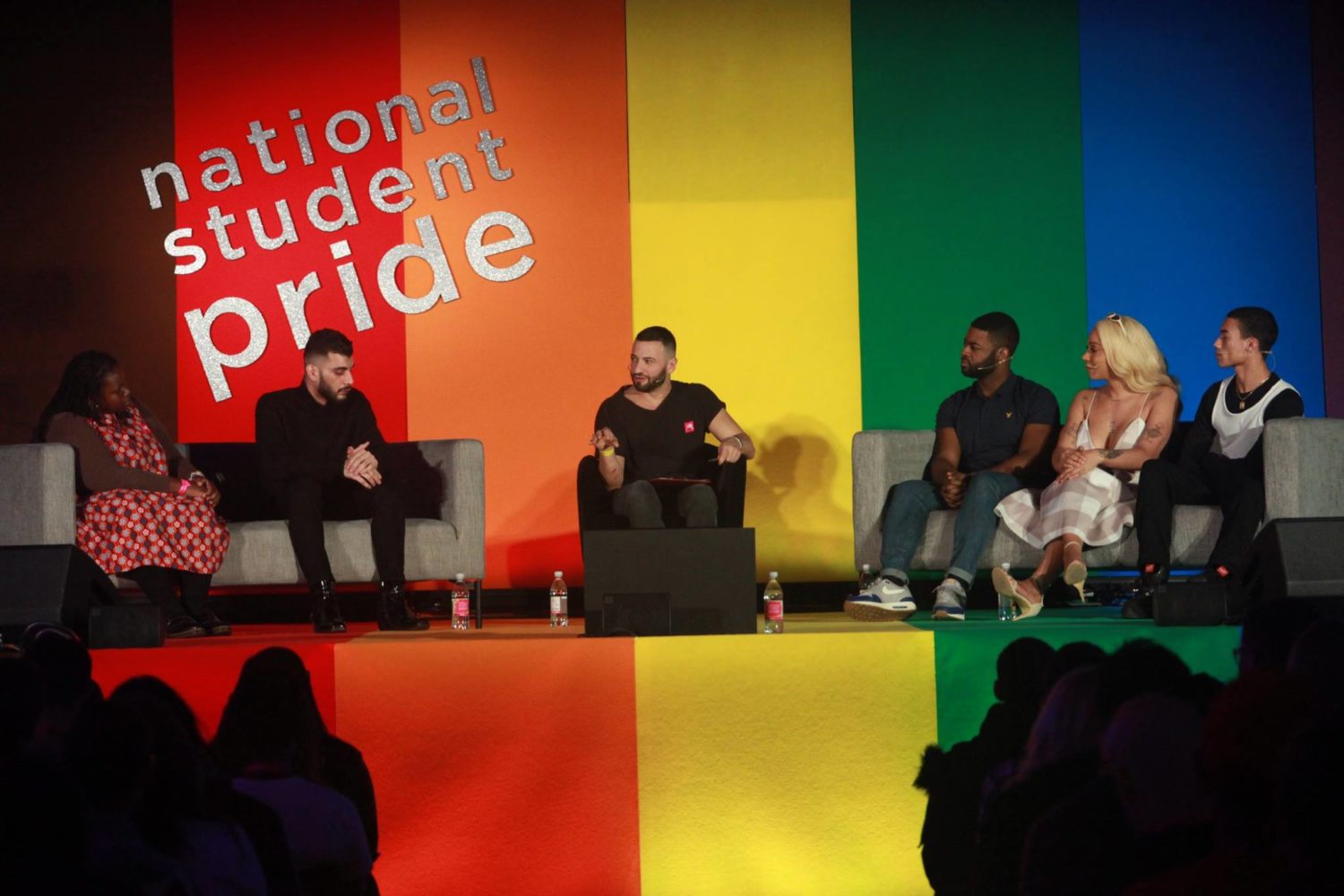 BBC LGBT+ CORRESPONDENT REVEALS HORRIFIC HOMOPHOBIA HE IS FACING BEFORE HE EVEN STARTS HIS NEW ROLE:

‘I have never received so much abuse in my life… I knew it’d be bad, but not that bad’

Juno introduced this section of the event by stating that she has never seen so many good-looking people in one panel, and it couldn’t be ignored that she was absolutely right. But this panel was clearly not just a collection of pretty faces.

Ben, new BBC LGBT+ Correspondent revealed the lengths some people have gone to send him comments like: ‘Since when did the BBC allow negroes on the TV’. The audience was visibly shocked when they heard this. How incredible is it that we have at last got someone on the BBC representing LGBT+ community, and at the same time  the often marginalised BME section our community. How disturbing is it that one week before he has even started the role, he is dealing with this sort of abuse. I was suddenly acutely aware of why this was such an urgently needed event.

Shamir Sanni explored the challenges of being a person of faith and a member of LGBT+ community. Shamir was questioned… “Have you ever been made to feel lesser because of your ethnic background, amongst other gay people”. He reflected that “a lot of white gay men do not understand the nuances of having intersecting identities and cultural identities, which Mouad concurred when she spoke about the prejudice she faces as a black lesbian woman.

Munro spoke with clarity about the transphobia she has faced, particularly as a member of the BME community “We are giving them platforms and allowing them to spread hate”. Munro poignantly pointed out that to remain impartial is to be complicit.

An Interview with Ian McKellen

Evan Davis interviewed Ian McKellen on the #QueerAF podcast, discussing his lifetime achievements and relationship with the LGBT+ community. This was the lightest hearted section of the day and McKellen got many a laugh with his unrelenting wit, gesticulating at one point about “drawings of genitalia in public bathrooms”.

They spoke about chemsex, drugs, his coming out and empowered the young LGBT+ audience.

McKellen spoke about when he first tried a joint at the age of 30, with Evan Davis adding that ‘drugs were much weaker back then’.

The audience at National Student Pride were enthralled by Ian with his re-telling of his pursuits to join the theatre as “one of the reasons I became a professional actor is because I learned that I could meet queers in the British theatre” and admitting “I just wish when I was younger I could have been myself”.

The conversation also looked at various aspects of McKellen’s life including how Margaret Thatcher’s Section 28 Law made him the activist he is today and how the queer scene in theatre was what first thing attracted him to the profession.

There was a firmly showbiz moment, when he reminisced about the fellowship (by that he meant the stars of Lord of the Rings) going to get tattoos. Not only did he give us a flash of his tiny tat, but he also recounted the moment he got to hold Elijah Wood’s hand whilst he got his!

Ian got some more political laughs with the reference to Theresa May: “Theresa May-be or Theresa Maybe-not” and had a very positive outlook on LGBT Britain today. He spoke about his impressions of the many schools he had visited and noted that they seemed to have been made into safe inclusive spaces that help all young people develop. Ian was confident about what we have in store “The future is no labels, no flags (he sings) I am what I am!”

The day ended with a Strictly Come Voguing competition, where students from all over the UK vogued for a chance to win – giving a reminder to popular TV show formats, that same-sex partners can dance together.

As the students all paraded off down Baker Street to make their way to Heaven and carry on the celebrations I couldn’t help but be impressed. Who says the future is grey? As far as I can see our new generation are articulate, empowered, and on a mission. I made my journey home feeling entirely fulfilled and very positive about the future. This is what I always hoped pride would be. I had never heard about this event before, and I will never miss it again. In my opinion it’s one of the most significant on the LGBT calendar!

I hope to see you all there next year.