It’s Saturday 22nd February and it’s my favourite job of the year, covering National Student Pride. Last year was a scream. Out of all the LGBT+ events this one really manages to strike a perfect balance. It has a generous portion of activism and a great big dollop of extravaganza!
The event began at Oxford Brookes University in 2005 to proactively challenge the Christian Union’s ‘Homosexuality and the Bible’ talk. From 2009 – 2013 the event grew and flourished in Brighton before moving to London in 2014. In 2020 National Student Pride celebrates its 15th anniversary. 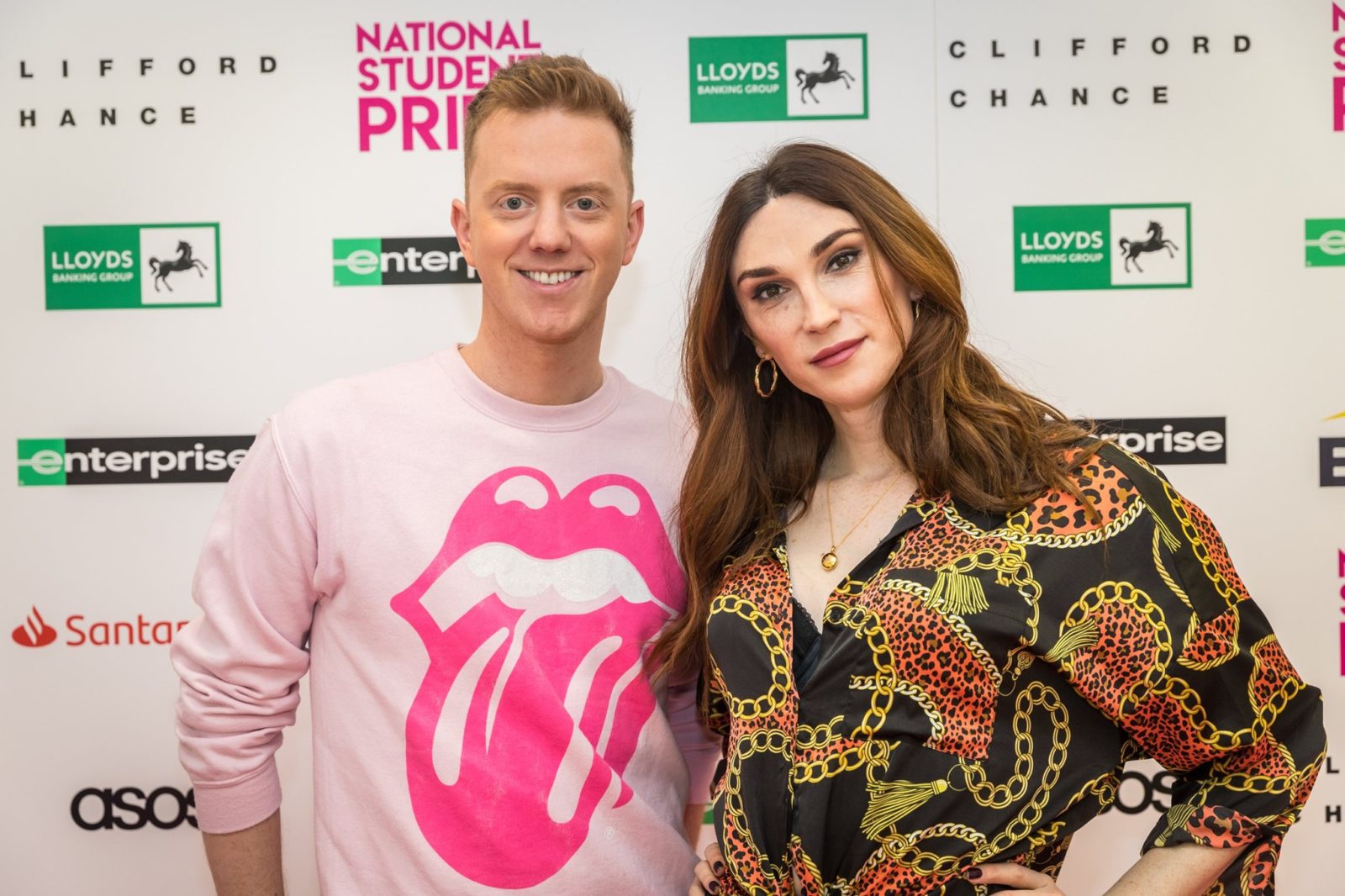 Greeted at the door by the lovey Ben with a huge smile and a promise of prosecco; I knew we were in for a great day. This year we were recording our live podcast. I still had the set up to do! Not before nipping downstairs to get few bubbles down me first of course. I waded through the crowd in the careers fair and felt a sense of deep satisfaction. All these major companies vying for the attentions of the very best young talent our community has to offer! A presence here shows which companies are more than just a rainbow on the side their packets during pride month. 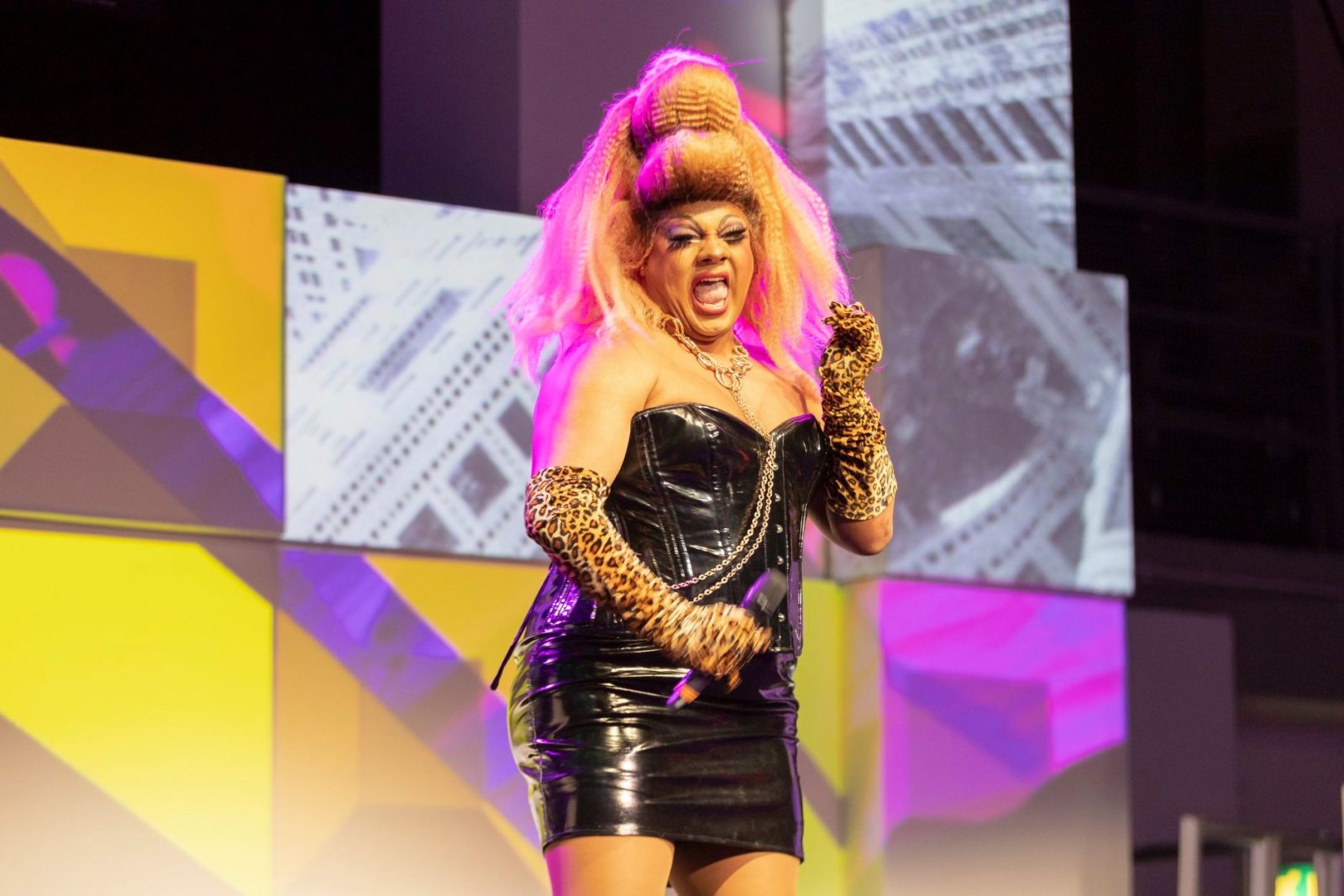 I was soon joined by Shereece, and we were in the lift to set up our traveling studio. Well guess who we bumped into in the lift, only our two formidable hosts of the day, the witty Juno Dawson (author and journalist) and the loveable James Barr (comedian and star of ‘A Gay and a NonGay’). Never one to miss an opportunity we harassed them to come on the podcast and they didn’t disappoint. We talked upcoming tours, ‘Sex in the City’ podcasts, trans allyship and much more. We also managed to get Student Pride outreach officer Louis to share just why this event was so important. Louis also let us in on his hot tip off about the best new drag show in town.

With the podcast recorded we hot footed it downstairs to the main event. And damn did it start with a bang…a Drag Race star sized explosion in the form of Vinegar Strokes. That queen can sing! Vingar got the crowd going and the day well and truly started. 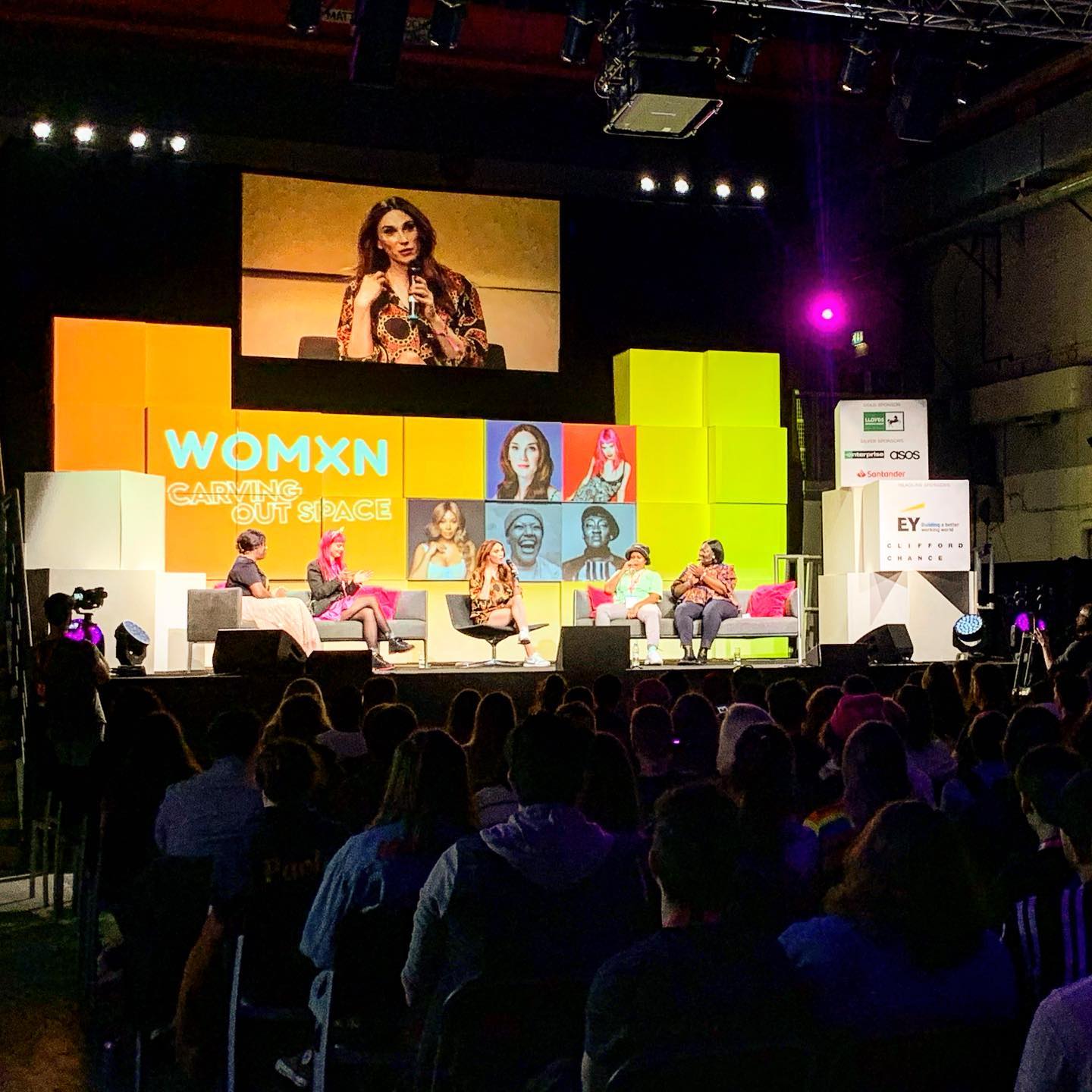 The first theme on the menu was carving out a space for womxn. How can we create an inclusive community for queer, trans, genderfluid and non-binary womxn in which everyone can thrive, no matter how they identify? The guest list was stellar. Expertly hosted by Juno Dawson the panel hit the hot topics straight on. “Why have womxn been side-lined?”. Lady Phyll (founder of Black Pride) hit the nail on the head when she talked about systemic misogyny and barriers of aggression. Talking about the ‘lived experienced’, she shone a light on the exclusion of queer womxn of colour. Going on to fill us with joy when she exclaimed…

“If your movement isn’t for everybody then it’s no good. If it’s not intersectional then two fingers up to it”.

Tanya Compass, an equally emotive speaker inspired us to acknowledge our privilege and be open to learn. ‘Girli’ (who later rocked her main stage performance) concurred. The singer then went on to relay the responsibility she had to assured that her concert spaces were safe for all.
This panel was a call to action, and I’ll be damned if I don’t respond.

Florence Schechter, Director and Founder of the Vagina Museum was joined by ITV Presenter Dr Ranj; Trans activist Charlie Craggs; James Barr, star of award-winning LGBTQ+ podcast A Gay and A NonGay; all in a panel hosted by Attitude Magazine editor Cliff Joannou.

TV presenter Dr Ranj also opened up about why he felt guilty about his first same-sex experience:

“My first same-sex sexual experience, having been with someone of the opposite sex for a long time prior to that, was riddled with a lot of guilt and a lot of other feelings.

Elsewhere in the building we learnt about the unique challenges posed for someone queer and disabled and developments in LGBT+ education in schools. 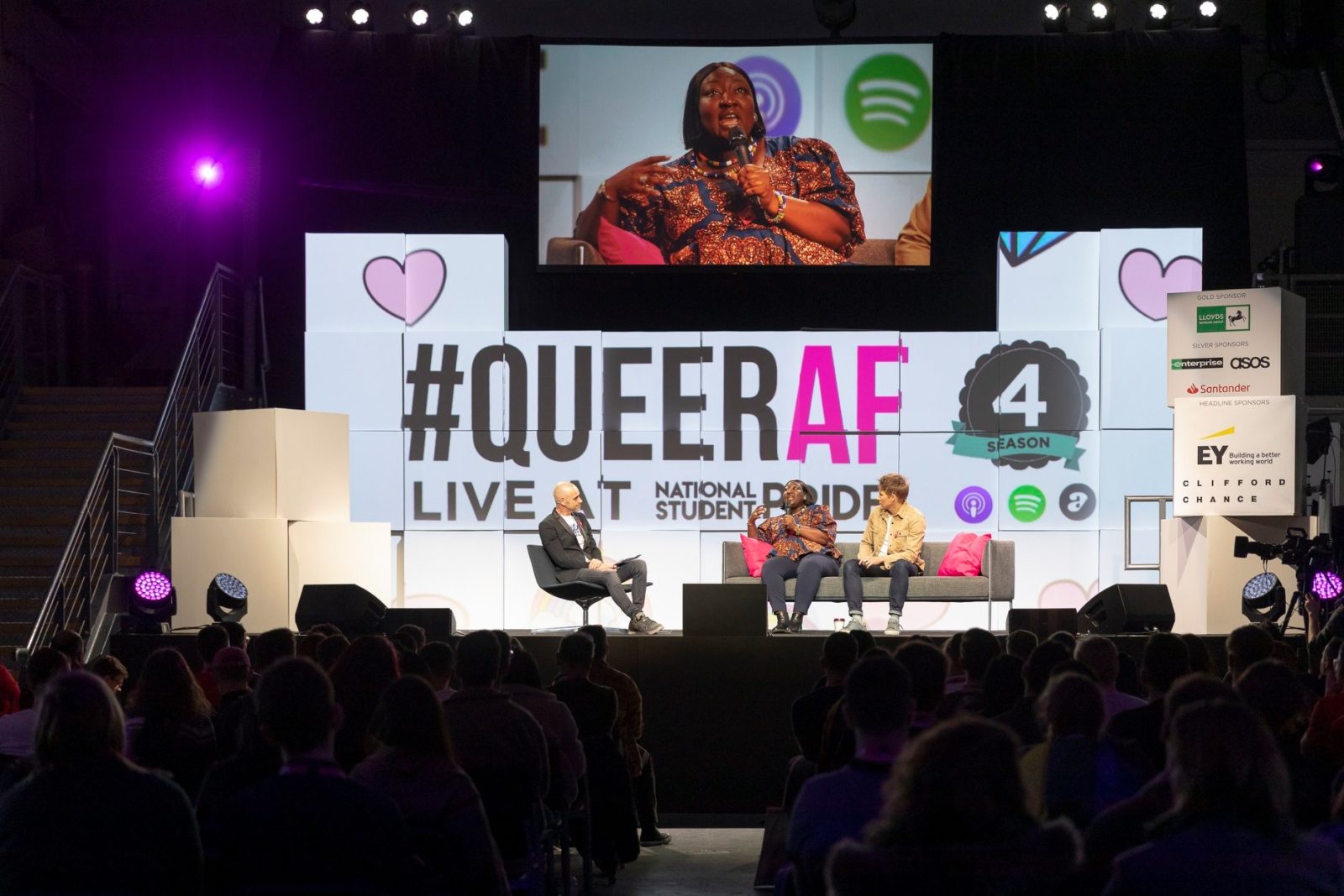 The final discussion of the day was on the #QueerAF podcast. At BGL we love to support a fellow queer podcast and this one is extra special. Not only is it a cracking listen, it is also a platform for hot new talent from within our communities. With the BBC’s Evan Davies at the reigns they didn’t let us down. Oscar winning writer Dustin Lance Black was joined by Lady Phyll. There was a beautiful moment when Lady Phyll emotionally praised Dustin. The reason for the accolade was using his privilege to make sure she had a place on the sofa. I could listen to these two speak all day. Two people that can really say they have made a difference. Lady Phyll was told there could be no black pride and now she stands at the helm of an event that serves 10,000 people. Lance Dustin Black urged us…

It is that attitude that helped him win marriage equality in the state of California.
As they drew it to a close, all I knew was that I wanted to be a better ‘social disrupter’.
After all ‘we are so stronger together’. 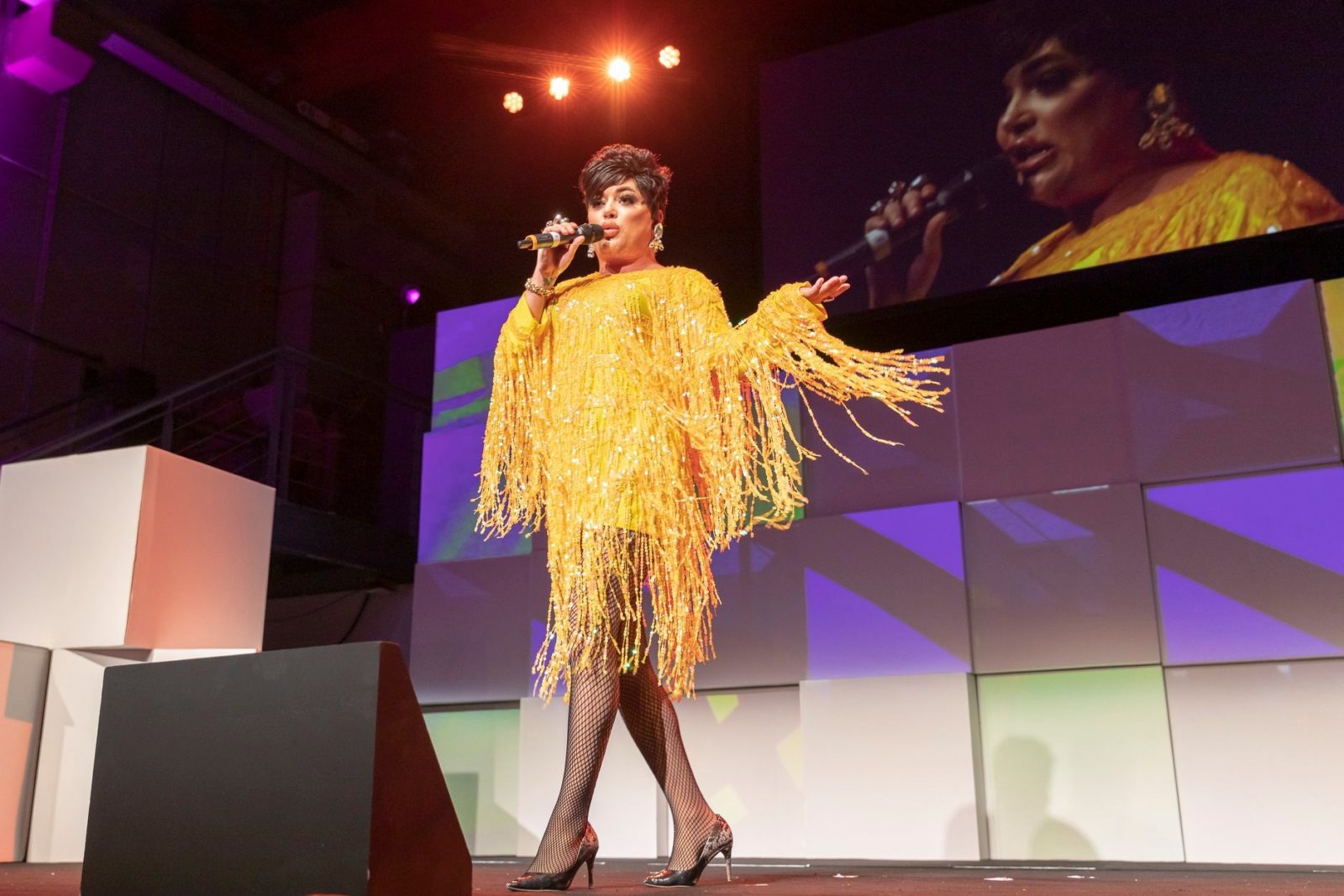 With my mind buzzing from all this inspiration I was ready to debrief with my friend.That was until we were dragged right back to the adventure…”Much better!”. It was everybody’s favourite, Baga Chipz in this brilliant new take on a gameshow classic….‘A Drag Chase Special!’. It was all crazy questions, glam and giggles. And what was the cherry on this great big tasty cake of a day? Baga performing the Frock Destroyers classic…’Bye Bye’; I’m in Heaven! Not literally though, I thought I would miss off a trip down the arches and leave that to the students. Although I heard the PussyCat dolls smashed it.
How the hell will National Student Pride do to top this next year?
I can’t wait to find out.