In the gay world we subject ourself to quite a lot. We reduce ourselves to a race, height, weight and a sexual position. We add the thumbnail photo in a game that can be as crude as it is brutal on our self-esteem. On the apps racism is in plain sight…

Not into Fat, Fem or Asians

Where are you from from?

What type of blood are you?

Oh I didn’t expect you to talk like that?

These are just some of the comments that I have had frequently on dating apps such as Grindr, Chappy and other gay apps over the years.

Gay dating apps are for gay people who want to find love, lust and everything in between. It could just be chat but usually with dating apps within the gay community there is very little small talk, and instant meet-up opportunities.

Here is a run-down of some of the more well known gay dating apps:

Let’s not lie, I was always going to start with this one. Branded as the world’s largest dating app for gay men as well as queer and trans people. Even straight people know of its existence and how infamous it is within the gay culture. You are more likely to receive a dick pic before a face pic from a headed torso and men appear in order of descending proximity so you can see how close your next hook up is.

A more hardcore version of Grindr with more mature looking gay men. The men on here tend to be more direct, less bullshit and more open minded sexually. Scruff was the first to develop the ‘Woof’ feature that Grindr have now taken. Scruff also allows for private picture albums though videos are only allowed for premium customers and unlocked when a user grants permission to a prospective suitor.

When Chappy came out I was so impressed with its slide right for Mr Right, slide left for Mr Right Now. It may have been late to the party but this app meant that gays flocked to it when it came out to try and find serious men in order to date. More respectable than Grindr but a smaller pool of prospects.

I could spend a lot of time going through gay dating apps but that wouldn’t be the purpose of this blog. To give a quick long list of other gay dating apps: Growlr, MrX, PlentyofFish, Hornet, Adam4Adam, Romeo, Squirt, Jack’d and Tinder. Just in writing this blog I’ve probably missed another 7 of this list – that is how quick gay dating apps are released as they each try to offer their version of how to attract the perfect guy for you.

So I wanted to begin with my first experience of racism from dating apps. I had arranged to meet a guy on a date following a brief chat. We had agreed to meet in a Soho bar and this was probably the first time that I had really set foot in a gay bar on my own since coming out. To say I was nervous was an understatement.

Skip halfway through the date and things were going well. I had eased up a little and we seemed to be getting on. He then asked me where I was from originally and asked if I was mixed race. I said that I wasn’t mixed and both of my parents were in fact Indian. All of a sudden he seemed to pause, put down his drink and say – “REALLY? You didn’t put that on your online profile.” I thought for a minute and said ‘I think I just put British’, after all this is the country where I was born and lived all my life.

Don’t Take This Personally, But…

He said in quite an apprehensive way – “so you are of Indian descent, interesting.” I said “how come?’

He replied “well,  and don’t take this personally but if you had put Indian on your profile I probably would have never agreed to go on a date with you. I only date black or mixed race men. I thought you were Caribbean mix or had mixed parents.”

Wow – how do you not take this personally? Why should it matter the birthplace of my parents for you to go out with me. It deflated me and made me realise in a quick instance how cruel and harsh the dating scene can be. I thought to myself what a lucky first date into the gay world I had eh. I am glad I changed his misconception about Indian gay men but I was taken back at how a small detail on a profile or app could be the difference in having a date or not. 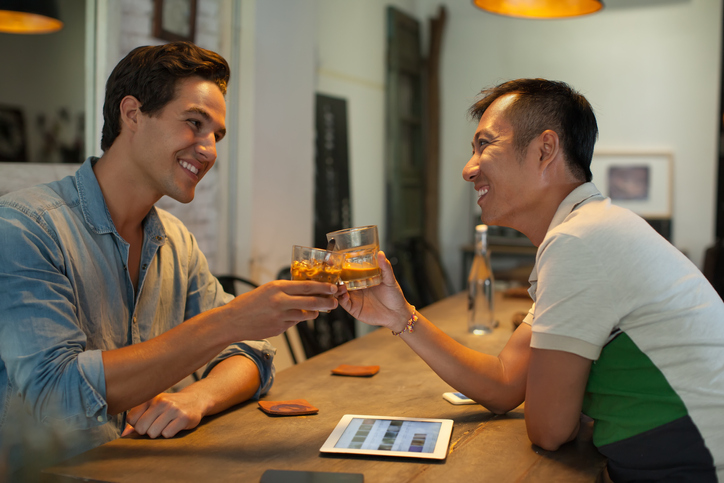 The Discrimination on Dating Apps Go On…

This was the first time I had experienced racism from a dating app but it was by no means the last time I would face this type of discrimination. Once I downloaded Grindr I couldn’t believe how judgemental other gays men were.

Many people had in their profiles –

No Fat, Fems or Asians.

No Blacks or Asians and the weird thing is that after using gay dating apps for a while this becomes normal and expected and you almost (almost) don’t feel shocked.

I’ve come upon a few shocking and disgusting profile descriptions over my years – here are some of the worst:

No rice, no spice, no chocolate.

No Black, No Asians and No Latino – White only apply

God why are people on these apps telling us we are too feminine, too ethnic, too fat, too skinny, too old? Ironically, unapologetic discrimination is so common in the gay world that it’s almost excusable. It makes me laugh a lot, that a group who campaigns for equality, love and inclusiveness so much, but the same group of people lack the basics of social etiquette.

Where Am I From?

My personal experience from using these dating apps was always mixed and made me feel pretty bad. Whenever I used to send a few different pictures of myself to other guys, I would often get the immediate reply – where are you from? I would reply,  London naturally. Sometimes when I was pissed off at their blatant rudeness I would reply I am from Sutton, Surrey – this is where I was born. I knew that they didn’t mean this but more from why was skin colour brown and what was my ethnicity or family background. When I replied that both my parents are Indian – I would often get blocked, be ignored, or a message back saying sorry you’re not for me I don’t like Asians.

I understand that people have preferences and are attracted to specific types of men but why when you have approached me saying that I have a hot picture and interested in meeting then do a 180 and say you’re not my type because of the fact that I am of Indian descent.

There Is Help Out There

MindOut is a fantastic mental health chart for the LGBTQ communty. If you want to improve your wellbeing or talk to an online support worker then get in touch with them.

I’ve got to say after a couple years being on dating apps such as Grindr and Scruff it all did get a bit too much for me. Mentally it’s very upsetting and you often question yourself and become embarrassed to say where you are from. It upsets me slightly that if I didn’t put my ethnicity I would probably get more dates and more people interested in me. I am more angry at myself that I have hidden this fact on apps as if I am ashamed to tell people. I guess I should embrace my heritage and where I come from.

Taking a Break from Dating Apps

In this blog I have decided not to talk about specific men or encounters (apart from my first). I feel firstly that it would be unfair to shame these men. Another side of me though would love to point the finger and let the world know who they are. I think Grindr has taught me a lot about myself, how I perceive myself and my own insecurities. I think it’s important not to be engrossed in dating apps. It can have a very negative way on how we view society and people in our community. It’s easier said than done but after 8 years I am trying to do the old fashioned thing and meet people out in bars and clubs.

Personally for me I want to meet people the old fashioned way. I know this isn’t for everybody and it’s so easy to be tempted by the apps to hook up with people that are 100m down the road.